Due to a land slip involving a substantial retaining wall that supported the highway, an emergency closure of Soot Hill was needed in late December 2021.

The retaining stonework wall dates from the 1800s.

An adjacent building on the Cosgrove Business Park was damaged by falling masonry. The Council is liaising with local businesses who have been affected by the land slip. 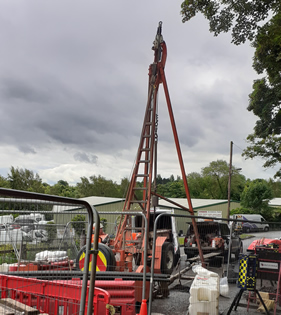 Following ground penetrating radar surveys and ground investigations works mentioned in previous updates, the Council has moved to the next stage of this repair project and signed a contract with Balfour Beatty plc, a well-known, national contractor. Working with design consultants, Ramboll, they are now working to develop solutions and costings to repair the landslip. Although the contract has only recently been formalised, the Council has been working with Balfour Beatty since March to ensure they could offer advice from the earliest possible stage in case of potential issues later.

Specialist expertise will be needed, including structural, geotechnical, drainage and highways engineers. These engineers will review and interpret the ground penetrating radar site surveys and ground condition investigation results, undertake load-bearing and road level calculations and then create the complex technical designs needed to ensure the permanent stability of the landslip area.

Our project team liaised with several organisations to facilitate the following works:

Previous activity at the site

Ground penetrating radar surveys have now been completed, along with ground investigation works. The investigations required bore holes to be drilled through the road surface into the ground below, to a depth of 20 metres, to find out what material was underneath the site.

Before that residents and businesses saw activity at the site as work started to secure the high voltage cabling, power supply and other piping in the area, including:

It is not currently safe to access the site due to the risk of further collapse material falling onto the site.

To protect the public, the Council has erected signage around the affected area, asking people not approach the site.

The Council has acted quickly to assess what repairs are needed.

3D laser scan technology has been used to produce plans of the site in order to help our engineers formulate a plan to stabilise it.

The 3D scan shows high voltage electricity and telecommunication cables have been exposed which are suspended above a void, large concrete remnants of the collapse material are above the live cables on each side. Generators are available on standby should there be a further collapse and the electricity supply is affected.

Thankfully nobody has been injured and it is important that we progress in a careful manner to ensure the safety of those undertaking the works and those adjacent to the site.

An experimental one-way system on Lydyett Lane from Hayes Drive junction through to the junction with Broadway (in a south-westerly direction) has been introduced from 26 April 2022 for up to 18 months.

The traffic situation in Barnton has been closely monitored to see the impact on traffic flows and increased road safety concerns.

Two-way traffic on Lydyett Lane has been a concern for some time, prior to the closure of Soot Hill. There are limited passing places, there are also pedestrian safety concerns as vehicles are currently driving onto the footways to avoid oncoming traffic. A decision will be made at the end of this period, whether it would become a permanent measure.

The process for repairs is a complex one that requires a careful approach to repair the damage and ensure the safety of those undertaking the works and those adjacent to the site.

Work will need to take place around the existing power cables. Generators will be needed by Scottish Power to provide power to substations in the area to allow the cables to be switched off. Once the cables are supported and protected, they will be switched back on. This initial work will take a number of weeks to implement and will start as soon as all of the plans are in place.

Once these initial works are implemented the site will be safe enough to access for the investigation team to pinpoint the cause of the land slip.

At the same time, SPEN will be installing new cables on the other side of the road to allow for the ultimate removal of the cables that are currently within the failed section.

Design work will start after the investigation into the cause of the collapse has concluded.

These investigations will inform the ultimate repair, which will be the subject of a further report.

The extent and duration of the work will depend on the findings of the investigation team.

Due to complex, difficult, and costly nature of the repairs needed, it is anticipated the road will remain closed for at least a further 12 months. Our response to the land slip is being progressed as promptly as possible.

Further updates will be detailed on the webpages as well as our monthly Transport and Highways enewsletter.